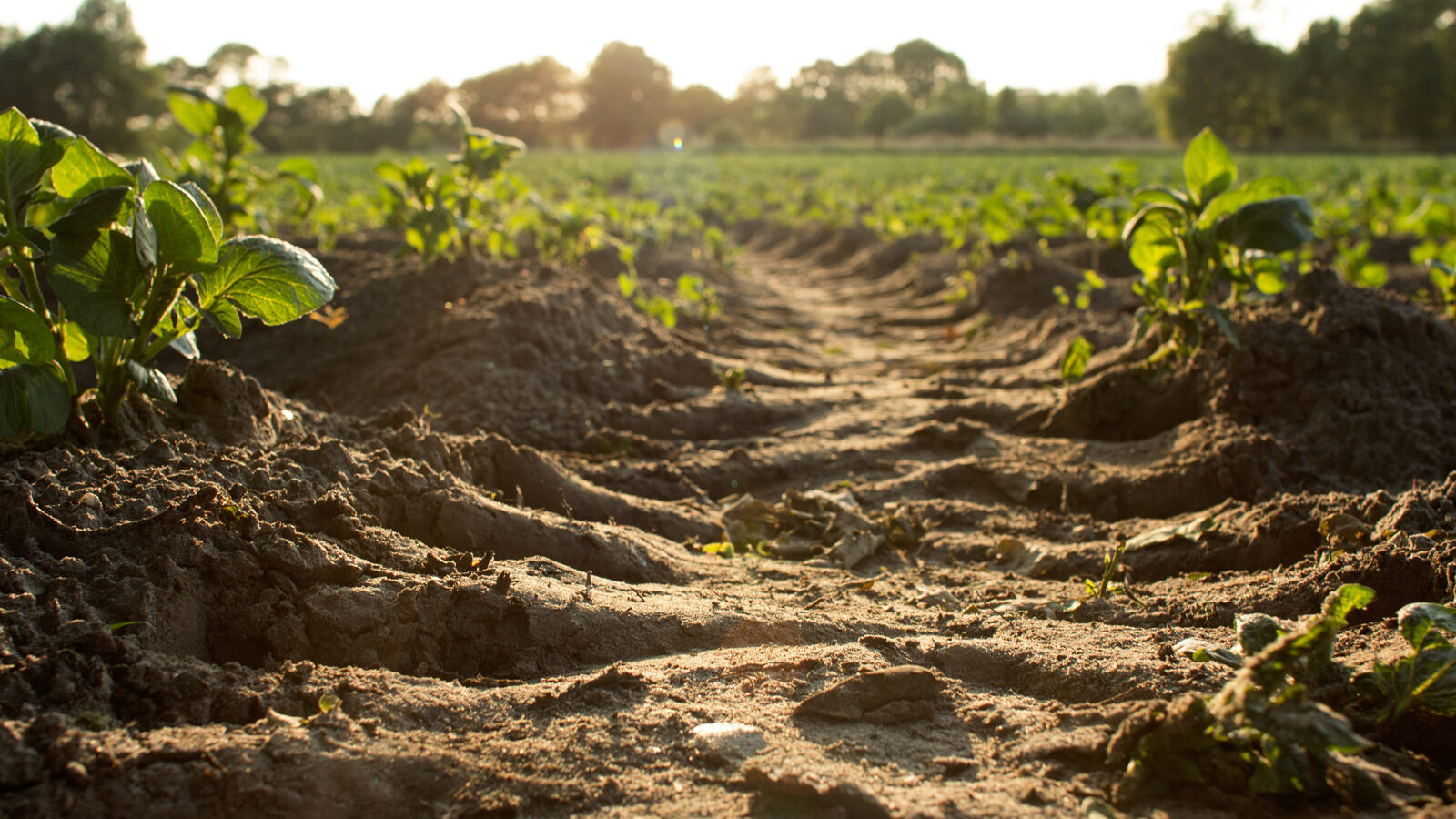 The S.O.I.L.S. of the CPM Continuum: The Sliding Scale of Strategic Time Investment

The training participants were drawing near the end of their three-week CPM (church planting movement) training. As they heard God speak, each drew up a three-year strategy plan for the city or people group he or she represented.

As my wife and I met with them to review these plans, the questions that rained in were “Where do I start?” and “Whom do I give my time to?” It would make sense that each participant, receiving the same training, should endeavor in similar paths using similar biblical principles. And this was true.

Yet their contexts were so different that the starting points along the path of the CPM continuum (see the Sept-Oct 2014 article) varied with each. Whom they invested their time in was going to vary depending on the starting point. We found
our advice varying widely because of this.

CPM practitioners have to invest their time in the right people with the right activities at the right stages and then must adjust their relationships and activities along the way for the movement to progress in a healthy manner. There are strong scriptural precedents for this, especially in the life of Paul.

This article comes from Steve Smith and can be found here.

Adjusting how we spend our time – Paul’s example from Ephesus
The Ephesian movement was the high-water mark of Paul’s three journeys. In two year’s time, through his work in the capital of Ephesus, everyone in the Roman province of Asia heard the word of the Lord. (Acts 19:10) Ephesus illustrates how Paul shifted whom he invested in and what he did with them to help launch and sustain such a movement.

Upon arrival, there were very few if any believers. When you lack believers, what must you do? Share the gospel a lot. For three months, Paul devoted his time to the lost sharing the gospel of the kingdom (Acts 19:1-8)

When persecution emerged after three months, Paul shifted how he spent his time and with whom. Acts 19:9 marks this crucial shift with the word “but.” Paul began to devote more time now discipling and training his new disciples rather than in personal evangelism. He used a rental hall daily over the next two years to accomplish this. (Acts 19:9-10) As he trained these disciples, they began to take the gospel all over the province during this period of time. (Acts 19:10)

Paul monitored the situation to ensure that the gospel was getting to the major segments of the province in the same manner he brought it to Ephesus. (Col. 2:5) For example he tracked and prayed for the progress of the gospel to other cities like Colossae and Laodicea– disciples he had never met in person. (e.g. Col. 1:3-9, 2:1)

In all likelihood while Paul worked in Ephesus, he eventually shifted much of his time to develop leaders in this movement – Timothy, Epaphras (Col. 1:7), Archippus, (Col. 4:17) etc. To underscore this shift in activities, at the end of his third journey Paul made a point of returning to visit and exhort only the leaders (rather than all the disciples in Ephesus) at a remote location during his return to Jerusalem. (Acts 20:17)

The Asian movement (with Ephesus as its epicenter) emerged and grew in a healthy manner in large part because Paul shifted his attentions appropriately at various stages.

For us to live in the same manner, it is helpful to think about five groups of people that should be invested in in varying degrees along the CPM journey. They are the S.O.I.L.S. of the CPM continuum. S.O.I.L.S. helps us clarify how we are spending our time so that we can most fully cooperate with the Spirit in launching and sustaining CPMs.

Evaluating Your Situation
The first step comes with finding your starting point on the CPM continuum. You do this by evaluating the situation of your target group – a city or people group. In a CPM many disciples and churches are multiplying generation by generation. The key to all of this is local believers living out this vision and lifestyle.

What is the nature of your situation toward that end vision in terms of local partners? 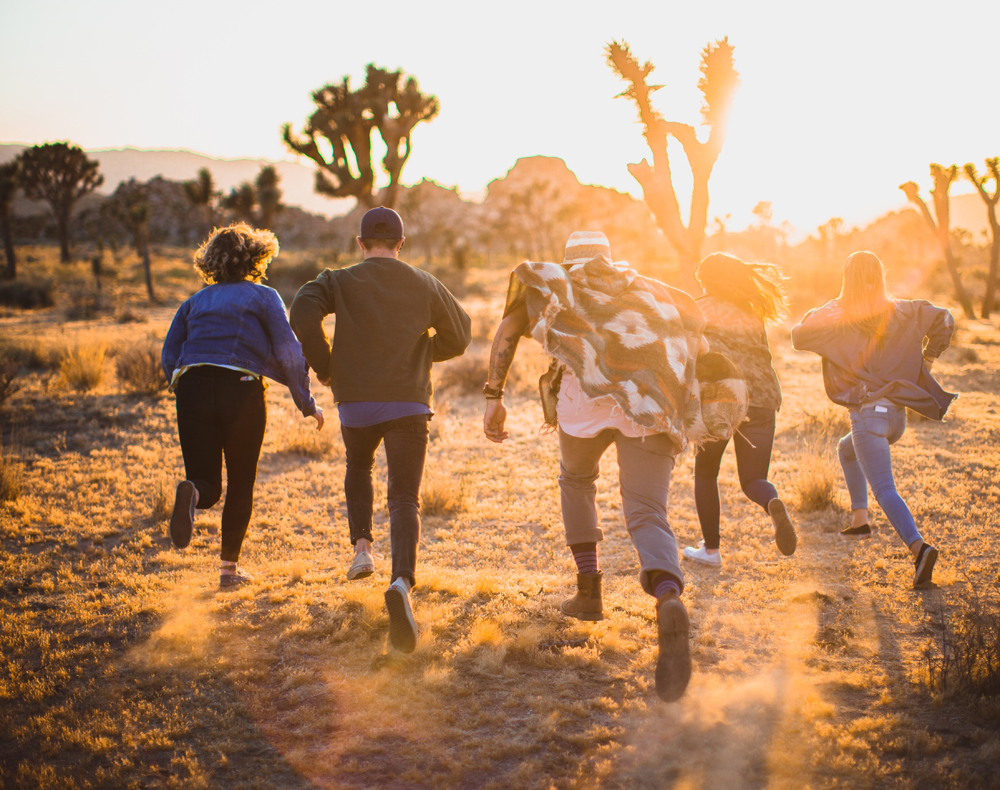 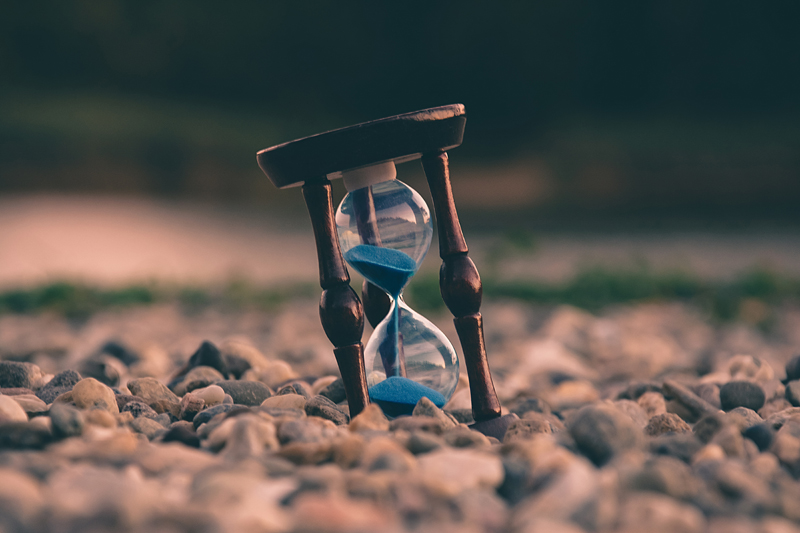 WHOM & HOW: Five Relationships to Invest In

An observable progression in CPM development is that effective CPM practitioners invest in the right people with high value activities at each stage. These five relationships can be summed up with the acronym S.O.I.L.S.: Spirit, Outsiders, Insiders, Leaders, Segments. Spirit – Fervent Prayer Always
The first major relationship that we need to cultivate, and an activity that never wanes, is fervent prayer to the Spirit of God for kingdom breakthroughs in our contexts. Prayer precedes and pervades every effective CPM strategy. We, our teammates and our national partners fervently seek God’s face to open the hearts of the lost, to open our mouths to be bold and to establish His church. Outsiders – Mobilizing Them, Winning Houses of Peace and Planting the First Churches
If you have few or no target group believers, then much of your activity is spent as an outsider mobilizing other outsiders–often near culture believers and sometimes far culture partners–to begin the evangelism process to find the persons of peace and houses of peace that the Spirit is preparing. This involves much vision casting to mobilize partners and many “pushes” (like Luke 10) to win the first households to faith and plant the first churches. Hundreds and thousands of gospel conversations are needed to establish the first groups of believers you will invest in during the next stage. Insiders – Training New Local Believers in Reproducible Ways for Evangelism, Discipleship, Church Planting and Leadership Development
As you and your team have more local believers, you begin to shift your focus to disciple them regularly for the long-term. Your focus is to train them in reproducible ways to help them grow in their faith and become healthy churches. You also train them to repeat the process of evangelism, discipleship, church planting and leadership development in a way they can obey and then train their new disciples to emulate. The most effective CPM practitioners fill up their calendars with such training/discipling groups.

You may already have some local believers in your target group. In that case, this stage also involves a lot of vision casting to them about partnering together for kingdom movements. In this stage, you are hoping to find groups of believers willing to partner together with you toward this end vision. If they are willing, then you begin to train them just like you do with the disciples you win yourself.

Leaders – Raising Up, Developing and Multiplying Leadership at Every Level
As the number of groups and churches grows, you and your team must again shift your focus and spend more time developing leaders of these groups and multiplying leaders to keep pace with the growth of the movement. Now you will spend less time in personal evangelism, and eventually less time training your own groups of believers, while you spend more time investing in leaders at every level the movement needs. Segments – Repeating the Process Until Every Major Population Segment is Reached
As churches begin to reproduce among certain population segments or geographical areas, you must evaluate where the kingdom has yet to come. Gradually you must repeat the process to make special pushes into these unreached segments to plant new churches among them until there is “no place left.” (Rom. 15:23) Most people groups will require thousands of churches before they are fully reached. We must be careful not to leave before the vision and momentum are in place to accomplish this. The Sliding Scale of Time Investment
Essential to the progress of a CPM is that we know in whom to invest our time and how to relate to them at each stage of the work. On the sliding scale of the CPM continuum, we must adapt our role appropriately. I find that effective CPM practitioners appropriate their ministry investment in the approximate ratios shown below at each stage. These approximate ratios give you the idea of how to shift your attention so that the momentum of a CPM will continue.

Two dangers arise as practitioners seek to implement a CPM approach:
1) they do not give their attention to the right persons in the right ways.
2) they do not appropriately shift their attention along the way.
It is not uncommon for us to default to the activities and relationship we most enjoy and are good at.

For example you may enjoy developing leaders. But if you are at the “NONE” or “FEW” stage, you will not have local leaders to develop if you don’t engage in evangelism, church planting and training of local believers.
Perhaps you love the outsider phase of looking for persons of peace. But if you are at the “MANY” stage and do not shift your time, your local leaders will not get the attention they need.
However you accomplish it, you and your team (including your national leaders) must find ways to give attention where attention is due at each stage. If Paul had continued evangelizing in the synagogue in Acts 19:9 rather than shifting his focus to training his disciples, it is very possible that verse nine might have read: “But when some became stubborn and continued in unbelief, they dragged Paul out of the synagogue and stoned him.”

Frequently we must shift doing what we enjoy for the sake of doing what is essential.

Since shifting requires a conscious effort, it is easy to fail to make the proper adjustments along the way. Here are a few of the most common pitfalls: “O” stage

– Not mobilizing enough partners to share the gospel broadly to find the persons of peace. For example, if the ratio of persons of peace to non-interested persons is 1:100, your team will have to generate hundreds and thousands of gospel conversations.
– Stopping when you have one or two houses of peace. Getting just a couple of groups to invest your time in at the “I” stage is not enough. You need many of these groups, so keep finding persons of peace.

– Not investing in enough discipling/training groups. Since you do not know who will bear good fruit, you must train many people to find them. Most effective CPM practitioners train multiple groups simultaneously.
– Not casting vision to existing churches/believers because you think they will not be willing to partner. Some existing churches may be shallow in faith, tradition bound or cautious about CPM. But patient, loving, vision-casting and biblical encouragement can help many of them become good partners. Don’t rule them out because they don’t look ideal from the start.

– Failing to begin middle level leadership training in time. It is very common for practitioners to invest in group/church leaders, but planning to train leaders who have several groups and several generations (middle level) must be a top priority as generational growth begins.

– Leaving the work before multiplication is happening in every major segment consistently. Many CPM workers want to “exit” their work once a CPM starts. But many CPMs fail to penetrate every population segment. Instead of exiting, “expand” the work until you see fourth generation churches in every major segment and then launch CPMs in nearby people groups. Don’t exit but expand.

One of the most refreshing aspects of the S.O.I.L.S. is that it helps us prioritize our time and say “no” (or “less”) to relationships and activities that will distract us from the advance of the kingdom. May there be no place left!
How do you need to spend your time? 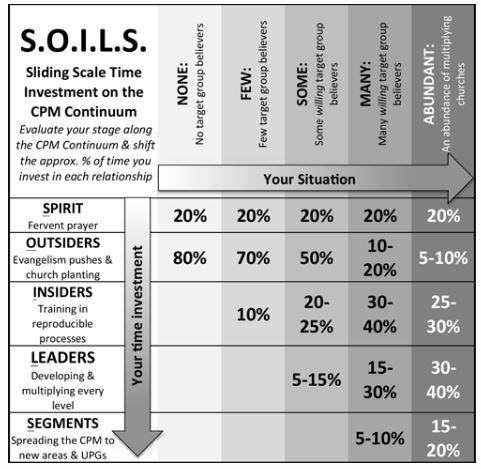 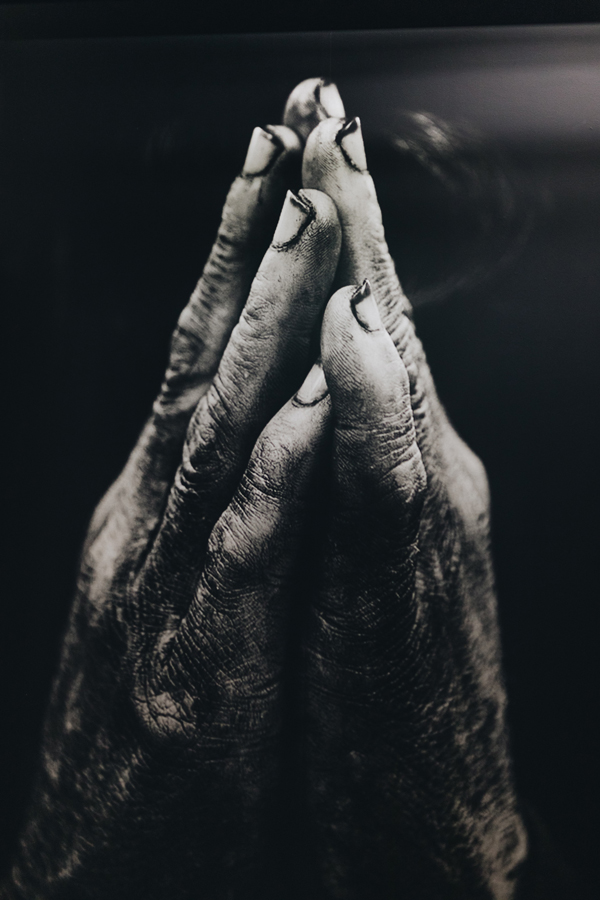